A herniated disc is also often called a slipped disc. But it does not mean the disc has shifted or fallen out of place. It actually refers to a disc that is in one of four stages of degeneration, from a bulging nucleus to a ruptured outer ring. That’s why the terms herniated disc, bulging disc, ruptured disc or torn disc are more appropriately descriptive. A herniated disc can cause painful and uncomfortable symptoms throughout the back, neck, and extremities, depending on the location of the herniated disc. Dr. Stan G. Langford III has earned the trust of his patients by offering effective chiropractic care and provides non-surgical herniated disc treatment at his Chula Vista, CA, practice.

Causes of a Herniated Disc

A herniated disc is often caused simply by daily wear and tear on the spine. Particularly at risk are people with repetitious jobs that involve heavy use of the back. It also may be caused by an injury. Pain from a herniated disc is sometimes the result of pinched nerves that are crowded by the leaking nucleus of a ruptured disc. Pain can gradually build over time, or pain may occur suddenly when something as simple as picking a shoe up off the floor aggravates the weak disc.

Anatomy of a Herniated Disc

A herniated disc is often caused simply by daily wear and tear on the spine. Particularly at risk are people with repetitious jobs that involve heavy use of the back.

A herniated disc most often happens in the low back as this area of the spine, the lumbar region, carries most of the body’s weight. The amount of pain that is caused by a herniated disc depends on the amount of gel-like nucleus that breaks through the annulus fibrosus and if it compresses a nerve.

Four Stages of a Herniated Disc 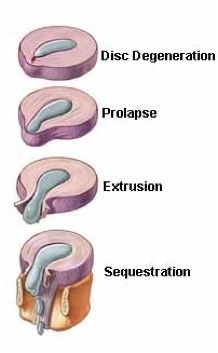 There are four stages in the formation of a herniated disc.

Herniated disc symptoms are often sharp, cutting pain, but may also include dull pain, muscle spasm or cramping, weakness, tingling or referred pain. Referred pain means that there is a pain in another part of your body. For example, if you have a bulging disc in your low back, you may have referred pain in your leg. This is known as sciatica – a shooting pain that can go from the buttock into the leg, and sometimes into the foot.

Treatment for most patients with a herniated disc does not normally include surgery. Eighty percent of patients will respond to chiropractic treatment when a proper treatment schedule is completed. Initially, a very short period of rest may be recommended, with a gradual return to regular activities. Sitting is bad for this condition because it puts a lot of stress and pressure on the lumbar spine, the location of most herniated discs. Ice therapy is recommended to reduce inflammation.

Studies show that chiropractic adjustments not only reduce the size of herniated discs but in many cases lead to regression. Regression and reabsorption depend upon the size, location, and phase of the injury. Contact us online to learn more about herniated disc and our treatments.